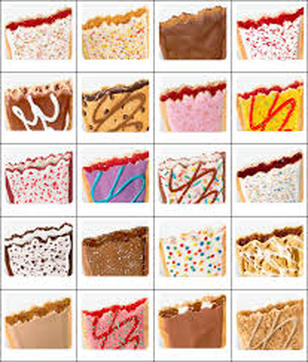 In this day in age in America, one has to make a conscious effort to eat whole foods.  A vast majority of food items available to consumers are highly-processed or full of additives with hard-to-pronounce, complex names. This is because these foods are quicker to make, and thus they are cheaper to make.  Consumers will buy the cheaper food products, and they will be in higher demand, and companies who produce them will dominate the market.  This leads to a cycle of highly-processed foods being the norm and found everywhere, with one having to go out of their way to search for healthier alternatives.  I felt like I ran into this dilemma on Day 2 where I did my best to not eat highly-processed foods.
I feel like I generally eat whole foods, so changing my diet for a day was not impossible.  The foods listed on Day 1 and Day 2 are quite similar (both days I ate soup, salad, eggs, and fruit).  However, I did run into some roadblocks namely during breakfast and my late-evening snack.  During breakfast, I normally eat a bagel to get in some carbohydrates: I feel tired and just plain weird if I do not start my day off with some carbohydrates.  But, I could not eat a bagel on Day 2 because many bagels (especially the ones easily available to me) are anything but "whole." In fact, as Melanie Warner points out in Pandora's Lunchbox, breads in general, unless they are artisan, are definitely not whole and do not contain only four ingredients (like traditional bread): "Most large American bakeries long ago abandoned traditional bread making in favor of much lower-cost forms of production ones that require a lot more than four ingredients - usually quite a lot more" (p. 100).  These industrial breads contain additives for flavor, consistency, and appearance, and some of them are not exactly one-hundred percent safe; for example, Subway bread contains the additive azodicarbonamide, where it is used "not in other areas of the supermarket but in the production of rubber and plastics" (Warner, 103).  So even though I did not eat my bagel on Day 2, I was not exactly upset, for I did not ingest as many rubber-making chemicals for breakfast.  I was happy enough to eat my organic, steel-cut oats.
The other area of trouble for me was my late-night snack.  I love Pop-Tarts, even though I know they are loaded with chemicals.  I once tried reading aloud all of the ingredients on the nutrition label, but I could barely pronounce two-thirds of them.  Regardless, Pop-Tarts are the one food filled with synthetic chemicals that I do not feel guilty about eating - they are just so delicious to me and they come in so many flavors.  And, they are one of the only sweet foods I enjoy.  However, they had to go for Day 2 because of the fact they are so very processed.  But the very fact that they are processed is the reason why I find them so delicious: they are scientifically engineered to be desirable.  In his New York Times article "The Extraordinary Science of Addictive Junk Food," Michael Moss says that many foods are "optimized" by food scientists to taste fantastic (and thus be bought more), just like my Pop-Tarts: "In the process of optimization, food engineers alter a litany of variables with the sole intent of finding the most perfect version (or versions) of a product" (p. 5).  To me, Pop-Tarts are a near-perfect food product, but for the purpose of the food diary they had to go.  So even though I was craving Pop-Tarts, I decided to go the healthier route and eat some natural sugar in the form of a banana, which I also did enjoy. 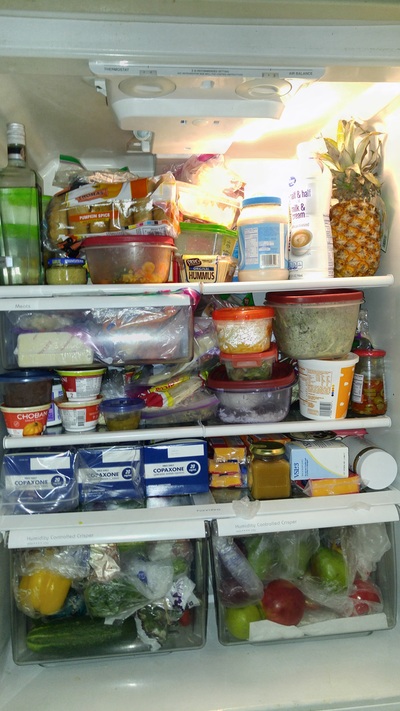 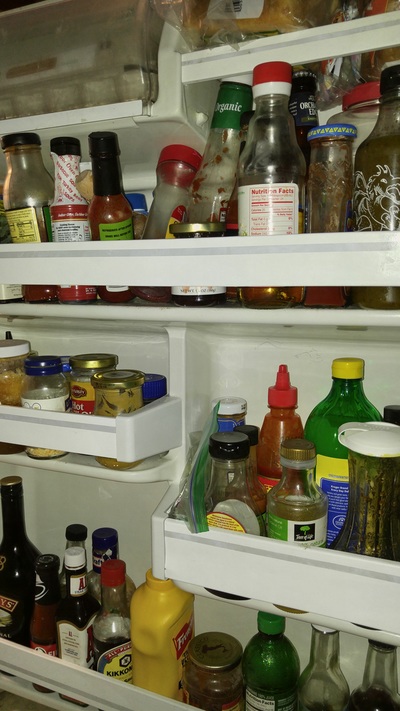 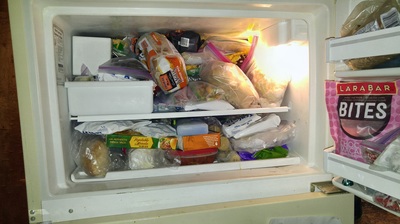 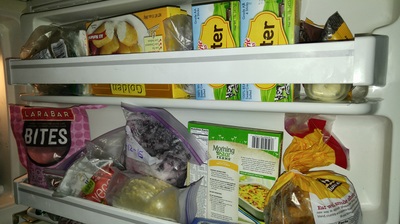 ​These photographs show the inside of a family of four’s refrigerator from the Lansing area.  When one opens the refrigerator, one immediately notices a variety of different kinds of food: cheeses, yogurt, cream., bagels, gin, homemade food in tubs, fruit, and condiments.  Interestingly, the refrigerator has a mixture of both processed and non-processed foods, and what processed foods there are seem to be on the less-processed side.  There are many containers of homemade food; I inquired about this, and the mother of the family told me she does most of the cooking, mostly from organic and natural ingredients.  This is reminiscent of the article “Something from the Oven” by Laura Shapiro.  In this article, Shapiro discusses how women in the 1950s felt obligated to prepare a meal from scratch (or close to from scratch) instead of just popping a pre-made meal into the oven or using box mixes.  Perhaps the mother of the Lansing-area family feels a similar need to make a meal herself and feel like she put effort into the food she serves her family.
Based on the number of dairy products in the refrigerator, it is reasonable to assume the family consumes (and perhaps enjoys) a large amount of dairy.  Yogurt, cottage cheese, sour cream, cream, and at least five blocks of cheese are visible.  Not seen are highly-processed “cheese foods” or “cheese products”, such as those made by Kraft, discussed in both Melanie Warner’s Pandora’s Lunchbox and Michael Moss’ “The Extraordinary Science of Addictive Junk Food.”  This family does not seem to have synthetic-chemical-filled “cheese” like Kraft produces and instead opts for more natural varieties that does not have the power to sit unchanged and stay “fresh” for a ridiculously long time.  Maybe the family recognizes that perhaps it is not in their health’s best interest to consume a lot of very processed food.  This fact is further evidenced by the large amount of produce in both crispers and scattered throughout the refrigerator.
More information about the eating habits of this family is gleaned through the contents of their freezer.  In the freezer, one immediately notices at least two vegetarian alternatives to meat: one is a vegetarian burger and one is vegetarian bacon.  This suggests that at least one person in the family is vegetarian.  But, as this is only one photograph at one moment in time, this might not be true.  Perhaps no one in the family is vegetarian but rather just enjoys the taste of vegetarian options.  There are two Udi’s products in the freezer as well, perhaps suggesting a member of the family is gluten-free.  However, one cannot assume this is a medical dietary restriction; maybe a family member has taken inspiration from the gluten-free fad.
Based on the amount of food in both the refrigerator and freezer, it is safe to assume the family spends a good amount of money on food and attempts to buy healthy options. The family may be middle- to upper-class and spends a relatively small portion of their money on food.  Or the family may be of a lower economic status and spend a larger amount of their money on food, perhaps sacrificing other items in the process of feeding their family healthy and delicious options for all family members. 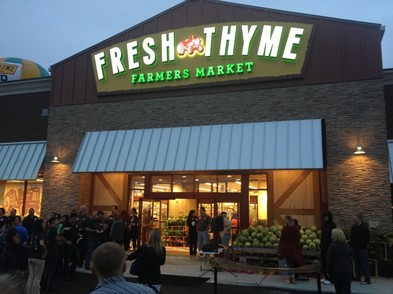 ​                ​McDonaldization is “the process by which the principles of the fast-food restaurant are coming to dominate more and more sectors of American society as well as of the rest of the world” (The McDonaldization of Society, 1).  McDonaldization has brought cookie-cutter sameness to every aspect of life, saving time and money but rendering everyday activities mundane and routine.  One important “principle of the fast-food restaurant” which has proliferated to other sectors is limited interaction between people due to the use of machines and scripts by which employees and customers have non-genuine, predictable conversations.  For this assignment, I challenged McDonaldization and its associated social codes of etiquette by breaking the scripts between employee and customer at Fresh Thyme’s delicatessen counter.
It seems relatively easy to challenge McDonaldization, but in practice it proves more difficult.  The main reason for this is the awkwardness that ensues from going against social norms. I asked the deli clerk various questions ranging from “what kinds of organic turkey do you have?” to “does your turkey come in phthalate-free packaging?”  Initially, I received little resistance, but as the questions continued, I could feel the attendant beginning to lose her patience. However, she remained gracious and met my demands quickly and efficiently.  She did not complain when I asked her if the turkey was grain or corn fed (as many animals are fed a corn-based diet, according to the movie Food, Inc.), and she read the packaging in which the turkey came to find the answer.  But, she looked at me as if I was exceedingly snobby, and she kept glancing at the growing line of customers behind me.
When I proceeded to inquire about cheese next, I heard a customer behind me audibly sigh in impatience.  At this point, I was feeling quite uncomfortable, for I felt very rude and inconsiderate.  I did my best to have a smile on my face and a polite tone of voice as I continued to break the script.  I asked whether the cheese available was imported or domestic and whether it contained witch hazel or animal-based rennet (if it is suitable for a vegetarian diet).  Eventually, a customer behind me in line came up to the counter and read the label on the cheese through the glass to help find the answer to speed me along.  This affirmed my assumption that the people waiting behind me were growing just as impatient as the deli clerk.
This assignment was difficult in that it caused me to go against the norms of a McDonaldized interaction by forcing me and the deli employee out of the expected script and eschewing efficiency for personal attention.  It highlighted how completely mechanized and cookie-cutter American industry has become.  McDonaldization has its benefits: predictability, efficiency, cheaper goods, and ease of access to goods.  However, McDonaldization also has its drawbacks: mundane sameness, lower-quality goods, non-genuine personal interactions, and resistance when scripts are broken in an attempt to have more genuine interactions with others (as evidenced by the behavior of both the deli clerk and the customers waiting in line behind me, unused to non-McDonaldized interactions).

Changes in Consumption of Sugars and Sweeteners